The Supreme Court of the United States has agreed to step in to resolve a long-running dispute between Florida and Georgia. As noted in my previous post, it is the second Florida case on the Supreme Court’s docket this term that involves Florida’s commercial fishing industry.

Profound economic implications are at stake for each state.

For Georgia, the outcome could determine the sustainability of continued growth of the state’s largest metropolitan area. For Florida, the outcome may impact the economic prospects of commercial fishermen and a region of the panhandle.

Environmental concerns are also in play. Hanging in the balance is the welfare of a biodiverse natural area, protected species of mussels, and spawning grounds for Gulf sturgeon, a threatened species.

As is true of many disputes between states, water rights are at issue in Florida v. Georgia. More specifically, the dispute centers around Georgia’s consumption of water from the Chattahoochee River (as well as Lake Lanier, which feeds the Chattahoochee) and the Flint River. Both rivers flow south from the Atlanta area before converging near the Georgia-Florida border to form the Apalachicola River: 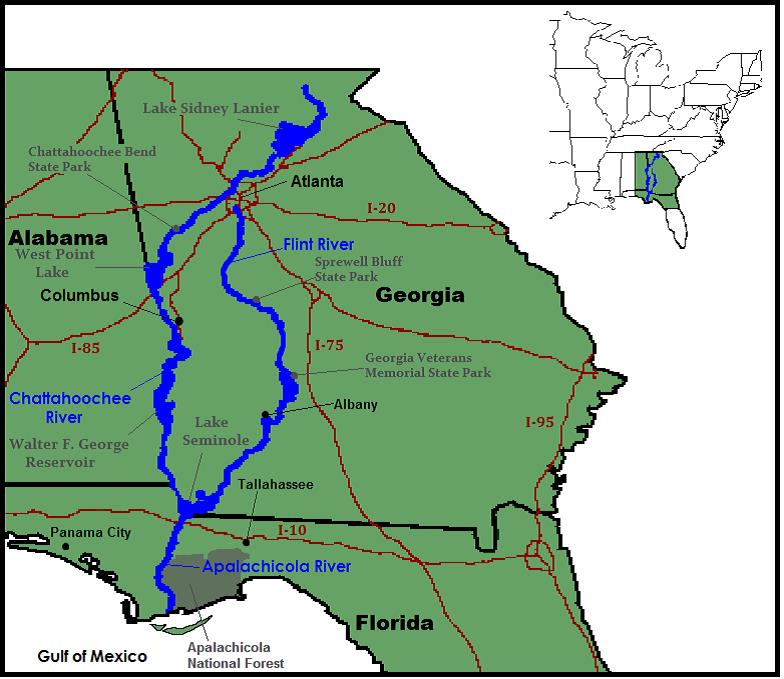 And the inflow of fresh water from the Apalachicola River has made the Apalachicola Bay fertile breeding ground for oysters. Historically, the bay has been Florida’s prime location for commercial oyster harvesting.

But that has changed in recent years. Oyster harvests were down 60% in 2013, leading the U.S. Secretary of Commerce to declare a commercial fishery failure. This year, the Florida Fish and Wildlife Conservation Commission (FWC) has implemented severe restrictions on harvesting, and is considering closing the oyster harvest in the bay altogether.

The loss of oysters in Apalachicola Bay coincides with decreasing inflows from the Apalachicola River, resulting in increased salinity in the bay, making conditions less favorable for oysters. According to Florida, the decreased inflow is the result of Georgia taking more than its fair share of water upstream, resulting in smaller quantities of water flowing downstream.

The dispute has been building since 1989, when the Army Corps of Engineers first proposed allocating more water to Georgia. Georgia, Florida, and Alabama reached temporary agreements for water use to maintain an uneasy status quo for a time. It was followed by litigation involving (but not directly between) all three states, the Army Corps of Engineers, and a group of power customers that buy power generated from a dam on Lake Lanier.

Finally, in 2013, Florida opted to sue Georgia directly, and asked the Supreme Court to intervene. With the Supreme Court’s recent decision to accept the case, Florida will now get its day in court. By extension, so will the Apalachicola Bay and its commercial oyster fishing industry.

Not Your Typical Supreme Court Case

Disputes between states are a different animal. Under Article III, Clause 2 of the United States Constitution, in “all Cases…in which a State shall be a Party, the Supreme Court shall have original Jurisdiction.” Based on that constitutional provision, Congress has enacted 28 U.S.C. section 1251(a), under which the Supreme Court’s jurisdiction is exclusive (meaning it is the only court in which suit may be brought) in any suit in which one state is suing another.

But the Supreme Court has discretion to decide whether such a suit is appropriate for resolution by the Court. A state wishing to sue another state must ask the Court for permission to file its complaint, which Florida did in October 2013.

The litigation will now begin in earnest, beginning with Georgia filing an answer to the complaint. Because the Supreme Court is not a trial court generally engaged in deciding disputed facts, the Court generally appoints a special master to conduct initial proceedings. The special master prepares a report, with findings and recommendations, either party can object to the report, and the Supreme Court reviews the special master’s report, considers any objections, and issues an opinion.

Ultimately, the question for the Supreme Court is how to equitably apportion the rivers’ water. In other words, it will decide the fairest way to allocate water among the states’ competing interests. That decision will affect the future of natural resources, industry, and citizens of both states.